Cultural heritage meets VR for a preservation project like no other 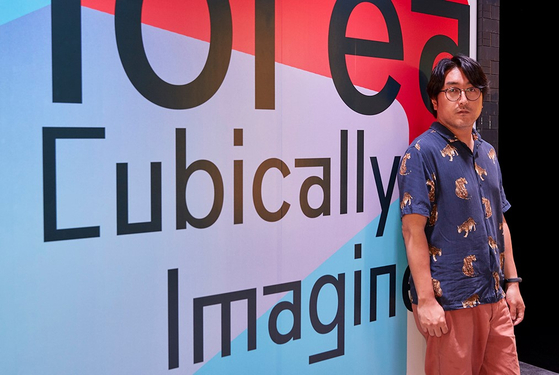 Bryan Ku, the head director of EVR Studio and the director behind the VR content inspired by “Parasite” (2019), poses for a photo at the press preview of his content currently on display at Unesco’s headquarters in Paris. [KOCCA]

Avid readers or movie lovers often emphasize the feeling of being “drawn into” books or films to the point where they can be consumed for hours on end. And with the development of XR (extended reality) and VR (virtual reality) technologies, consumers are quickly adapting to immersive experiences that creators have to offer.   This includes reinterpretations of original works as well as the preservation of culture that people want to archive for future generations.  VR content related to Bong Joon-ho’s “Parasite,” for instance, allows die-hard fans to “visit” iconic places in the film such as the Park family’s mansion, the half- basement apartment where the Kim family lives, and the stairs to Kim family’s home at the Unesco exhibition “Korea: Cubically Imagined” at its Paris headquarters which runs until July 16.

In partnership with the Ministry of Culture, Sports and Tourism of the Republic of Korea and Korea Creative Content Agency (Kocca), Unesco organized this immersive exhibition to celebrate the 2021 International Year of Creative Economy for Sustainable Development, and one of the highlights of the exhibition is the VR content of “Parasite” (2019), created by Bryan Ku, the head director of EVR Studio which focuses on developing online and mobile games and VR content.   Ku is a first-generation visual director in Hollywood who participated in depicting CGI (computer-generated imagery) effects for films including “The Lord of the Rings: The Return of the King” (2003) and “The Golden Compass” (2007). After settling at EVR Studio when he returned to Korea, the director’s interest shifted toward offering immersive experiences to audiences instead of settling for perfecting visual effects on two-dimensional screens.   In a recent interview with the Korea JoongAng Daily, Ku admitted that Korea is still taking baby steps when it comes to the creation of such content, which he said he especially felt when creating the VR content for “Parasite,” but this only motivated him more to continue challenging himself, along with other staff members, in this unfamiliar territory.   “It’s difficult," Ku said after the press preview of his work at the Content Cultural Plaza of Kocca in Dongdaemun district in central Seoul. “With 2-D works, from the planning to the production, the staff and related experts already know what we’re talking about. I don’t really need to explain it in detail. But when it comes to VR, the level of familiarity and experience is different for each and every staff member. I need for them to forget their prior notions or ways that they’re used to — only then we can start to create the content. I can’t do this by myself — content and films always require teamwork, but I really do feel that I’ve adjusted to such style through working on ‘Parasite,’ and I’ve become more articulate and detailed because of it. But I don’t want to keep my know-how to myself, and I hope to continue to spread my knowledge through more projects like this.”   The director gave further explanations about his interpretation of "Parasite." The following are edited excerpts of the interview.    Q. Who were the audiences you had in mind while you were making this content? A. I made this content with the aim of it being played to French audiences when they visited the Unesco headquarters. Since the original film was closer to the realm of an art film, I wanted people who already saw the film to feel something new, and for those who were unfamiliar with “Parasite,” I wanted to perk their curiosity so that they might become interested in watching the movie.  Although I have created VR content related to cultural heritage before working on this project, I’d never actually given a thought that existing content could become a heritage. But thinking about 10, 20, or 100 years from now, when people look back on the iconic cultural heritage of Korea, “Parasite” naturally comes to one’s mind.

A scene from the VR content which brings to life the secret basement in the Park family’s mansion. [UNESCO]

Why are the characters from the film not properly visualized in VR? In film, the dialogue of the characters is what drives the story. With the VR, I wanted to maximize the experience of being immersed in the story, so that the audience is actually in the story instead of simply viewing it.  The perspective of the scenes shift accordingly: Sometimes it’s seen from Ki-tae’s point of view, and sometimes it’s Ki-woo, or Geun-sae trapped in the basement. The figure which is banging its head in the basement is depicted in the form of a silhouette. In that moment I wanted the audience to portray that role, and really feel that they are part of this story.    As with the characters, some of the scenes stick closely to the details of the original movie while others have been interpreted in your own way. How did you decide which scenes you would give your own twist to? Bong is already famous for his attention to detail, so my priority was to make changes within the context of the original film and not damage it. I saw the film multiple times to count the number of books that were in a stack as well as the alcohol bottles lying around the floor and the number of stairs, and even to count the number of bars [in the basement window], and used those details in my content. But scenes such as when the figures go down the stairs, or the way suseok (landscape rock) looms down over the audience — the scale of the stairs or the rock in those scenes has been expanded infinitely.  In the case of the rock, we used our digital human 3-D scanner from the studio which we normally use to visualize human characters to make them as real as they can be and we brought the fake rock model that was actually used in the film. So I infused such surreal elements in the content based on the original context. Another metaphor I added from the original scene derived from the flooding in the half-basement. I personally viewed the flooding as the exposure of obsessions each member of the Kim family has, so I show these objects in order to emphasize their desires. For Ki-jung, it was the stash of money and a pack of cigarettes hidden in the bathroom; for Ki-woo it was the rock; for Ki-taek it was the silver medal.  There’s also a secret behind our music. All of the music used in the content is from the original film — but it has been rearranged, so it might sound familiar yet new for fans of the movie. Mixing the scores offered huge satisfaction to the creators who were reinterpreting the film, because what came out was completely new music which seemed to have been created for this very purpose. 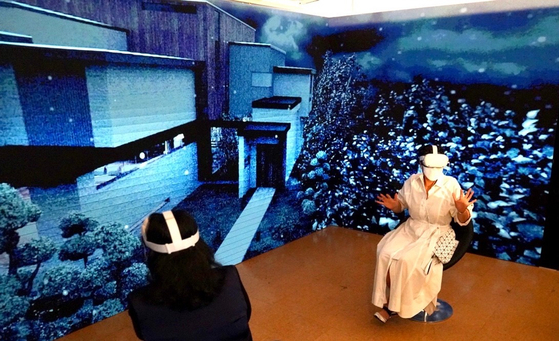 Saudi princess Haifa Al-Morgin, a representative of Saudi Arabia to the Unesco, is experiencing the VR content of “Parasite” at the opening day of “Korea: Cubically Imagined” on July 6 in Paris. [UNESCO]

Your previous VR content “Along the Way to Utopia” (2017) virtualized Bohwagak, the first modern private museum in Korea also known as the Kansong Art Museum. As you’ve mentioned before, you seem to be interested in using this technology to preserve Korean culture. Do these projects have any long-term profit model? No they don’t, which is why they’re easily excluded from companies. But this is not a unique phenomenon tied to the domestic market. In all realms of the global market, what motivates and pushes VR content forward is driven by commercial factors. Just because somebody has the resources and technology, it doesn’t kick-start non-profitable projects such as archiving our heritage. It has been the same everywhere: the notion of digitally archiving human resources derived from the White House when U.S. president Barack Obama left office. Before digital archiving, the presidents were marked by their statues while before, it was photographs, and before that it was portraits.  For Korea, elements of XR and VR technologies were totally alien to us in the last century, but now there are companies which possess them. As someone who works in one of those companies, it’s really up to the developers themselves to work on archiving, instead of waiting for someone else to do the work for them. If we continue trying, I believe that we will be able to meet somewhere in the middle — whether it be public awareness or financial support from the government — but if we continue to wait around, I fear that another decade might pass this way.  Commercially, our studio’s main projects include visualizing very realistic digital humans in games, but preserving our culture heritages come from my personal motivation, which I’ll continue to pursue regardless of the profit.   **After the immersive exhibition finishes, those who wish to view the VR content will be able to do so on Kocca’s YouTube channel. Specific schedules for the online release of the content are yet to be disclosed to the public.